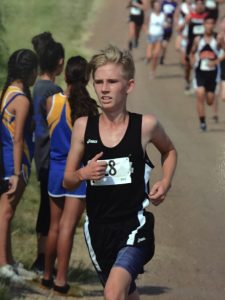 John Michael Morrison is the son of Doug and Amanda Morrison. On August 12, 2019, six weeks after his 17th birthday, he lost his life in a car accident.  He was starting his Junior year at Randall High School in Amarillo, TX.

John Michael LOVED TO RUN!!  As a Randall Raider his sophomore year, he qualified for and ran with his team at the State Cross Country Meet.  He was also the District 3-5A JV Champ in the 1600m & 3200m at the district track meet.  But more than running, he loved his teammates.  He had a “team first, ALL IN” attitude.  He encouraged his teammates in a Christian manner and put the best interest of his team and teammates before his own.

Your support will enable the Morrison Family to continue to honor John Michael’s memory and his love of running while helping fellow athletes continue their education.

For more information about the John Michael Morrison Memorial Scholarship or how you can help, please contact us below.